Breaking Bad
Bryan Cranston has indicated not only will it be difficult for him to appear in the upcoming “Breaking Bad” sequel film due to the events of the series, but he tells Today he’s committed to the Broadway production of “Network” until March.

That clashes with the film’s production which kicks off this month and runs to February. Aaron Paul is expected to reprise his role of Jesse Pinkman who is attempting to escape New Mexico after the events of the series finale. [Source: Today]

The story follows a group of Chicago teenagers that band together to turn art into action within their community. Grammy Award-winning songwriter and producer Nico Segal (fka Donnie Trumpet) will oversee the creation of the film’s original music. [Source: MGM]

Untitled Lauren Simmons Biopic
AGC Studios has acquired the life rights to Wall Street trader Lauren Simmons’ life story with the independent feature being shaped as a star vehicle for Kiersey Clemons (“Dope,” “Hearts Beat Loud”) who will also produce. 23-year old Simmons made history as the youngest woman to ever be on the floor of the NYSE, and only the second African American female to trade full-time. [Source: Variety]

The Boy Who Harnessed The Wind
Chiwetel Ejiofor’s directorial debut feature “The Boy Who Harnessed the Wind” has been picked up by Netflix for everywhere bar China, Japan and the UK with the BBC airing it in the latter. Based on the bestselling book by William Kamkwamba and Bryan Mealer, the story follows a 13-year-old boy (Maxwell Simba) who finds a way to save his village in Malawi from famine. Ejiofor wrote the screenplay and plays the boy’s father. [Source: Variety]

Veronica Mars
Clifton Collins Jr. and Izabela Vidovic are set for recurring roles in Hulu’s eight-episode revival of “Veronica Mars” which is set to premiere in 2019. Collins will play Alonzo, a mid-level hitman for a Mexican cartel. Vidovic will portray Matty Ross, a woman not content to wait for justice.

Kristen Bell, Enrico Colantoni and Jason Dohring are all reprising their roles from the original UPN and CW series from 2004-2007. In the revival, spring breakers are getting murdered in Neptune, thereby decimating the seaside town’s lifeblood tourist industry. After Mars Investigations is hired by the parents of one of the victims to find their son’s killer, Veronica (Bell) is drawn into an epic mystery that pits the enclave’s wealthy elites. [Source: Deadline]

The Orville
FOX has premiered the official poster for the second season of its sci-fi dramedy “The Orville” which is scheduled to premiere on Sunday, December 30th with new episodes then resuming on Thursday nights. 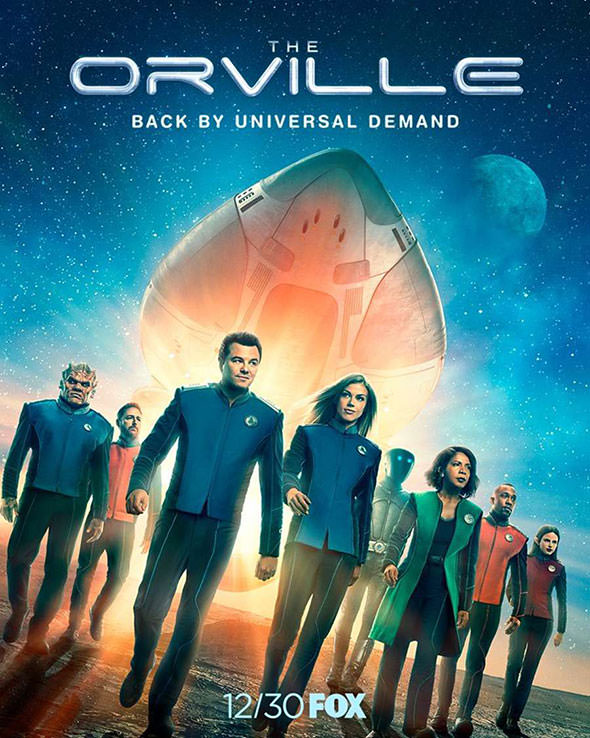 “The Batman” Suit In Action In Set Photos

A “Paw Patrol” Movie On The Way

“The Blacklist” Renewed For Season 8

Production Halts On The “Shantaram” Series

Worthington vs. Orcas vs. Sharks In “Alphas”