Actress Linda Hamilton returns to her most well-known franchise for the first time since 1991’s “Terminator 2: Judgement Day” with the upcoming “Terminator: Dark Fate” opening this Fall.

The film serves as a direct sequel to the two original James Cameron-directed movies and Cameron’s involvement as producer and overseer alongside director Tim Miller was a key part of getting actress to return to her role as Sarah Connor, even if she was initially reluctant she tells EW:

“There is a real gift in that so much time has passed, and that gives me so much more to explore with the character. Sarah Connor is the same person but I wanted to see how the difference in events have changed her and shaped her and send her forward. There was meat there. I didn’t want to just recycle the same idea. It’s a woman who has a different mission, a different story, so I wanted to see what we could do with that.

[Cameron] called me three times before I even called him back. The third time, he was like, ‘It’s about work,’ and I’m like, ‘Oh, hey, what’s up?’ But, even with that and his big sell, it took me weeks to decide that I really could go there and might have something new to say.”

Whatever she had to say, she seems to have found it. Asked about the character’s current state-of-mind and latest mission in the film, Hamilton says:

“She’s a woman without a country. Her original mission has changed due to circumstances and she really doesn’t have a team anymore, she just has a thirst for vengeance, so that makes her very alone. She’s still a wildcard, but a wildcard without a real true mission is a lot more unpredictable. Basically very hard for her to find her humanity, so once again we get to take a journey on that level, to have some deep things that need to be rediscovered for her survival.”

Hamilton is very committed to the role, both physically and mentally to the point that she did essentially a good year if not more of prep to get back into Sarah Connor mode:

Of course, one assumes if you put in the same hard work, you get the same results, so I went straight back into training really hard and it’s like, ‘Oh my god, you need hormones to put muscle on!’ So just starting with the basic cosmetics of the character and all of the things that I had to sort of include in my new reality as Sarah Connor.

But, really, it’s about building her backstory and figuring out where she’s been and who she is today. You have a character but so many things have impacted her in the last 30 years that it was like starting over, and yet, there is an echo of the younger Sarah Connor in everything that I had to create. But no, I worked damn hard. I spent a year-plus training really hard and working on her walk and exploring her deep sorrows and just so many elements, and more so, because there is a path there.

By the time we started, I felt ready, but a year-plus before that, I was pretty overwhelmed with a sense of obligation and duty and love for the character, just really trying to make sure that we honored the past and created something new for the future.”

Paramount Pictures will do a big presentation for “Terminator: Dark Fate” on Thursday morning at San Diego Comic-Con, expect a potential new trailer online sometime that day. For now, check out two new stills of Hamilton in the film below. 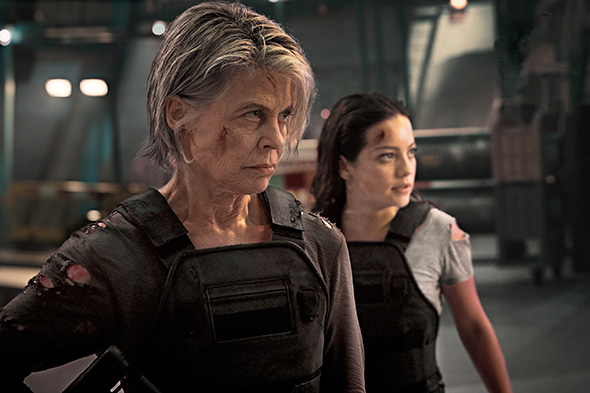 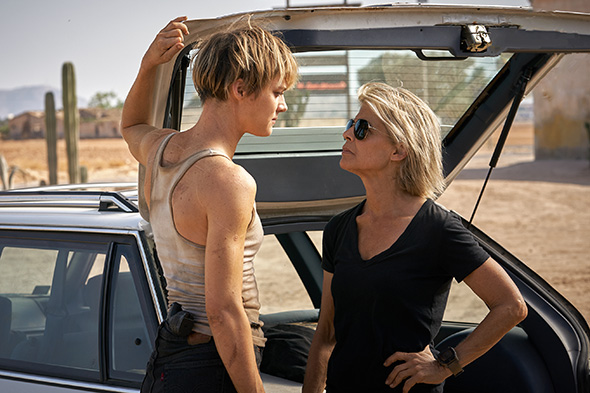